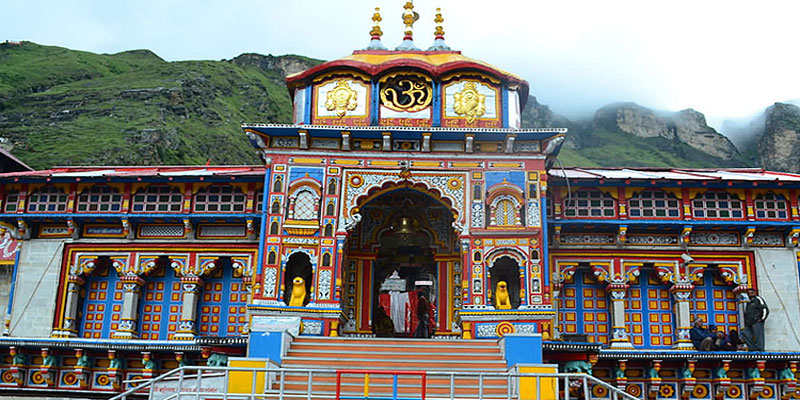 Badrinath Temple is most important among Chardham of India. The Holy Temple is situated at height of 11,800 feet. Also famous as vaikunth dham. Badrinath Dham is seats of lord Vishnu. Badrinath temple is in uttrkhand of India. Haridwar to Badrinath is 350 Km . In addition Temple is the finest example of northern Indian architectural style that accompanies the stone carvings designing alongside the interiors. One of the important Dhams of the Chardham Yatra, it is the holy seat of Lord Vishnu. The holy temple is in lap of Neelkantha Peak.

The interiors of the Badrinath Temple are appealing in its complete sense. On reaching the location of the temple alongside holy Alaknanda River.  Also, you get to see the 50 feet tall temple. Along with You can find the tall temple with small cupola on the top followed with the roof covering of gold gilt.

On reaching the temple, you will find the way to the Garbha Griha through the Sabha Mandap and Darshan Mandap. Also Garbha Griha is the main sanctorium wherein you can find the 1 metre high idol of Sri Badrinarayana. The idol is made of black stone. The idol displays the lord Vishnu in meditation posture known as Padmasana. Similarly Alongside the Lord, his better half Lakshmi is sitting by his side. Also you may find accompanying idols such as; Sage Narada, Garuda, Navdurga, Kubera, Nar and Narayana.

Garbha Griha: It is the innermost chamber of the temple. This sanctum sanctorium houses the main idol of Sri Badrinarayana posture in the meditative position of Padmasana. Also, The Lord sits beneath the gold canopy and accompany inside the chamber with other 15 idols of various Lords. As per the legendary sources, Legend Shankaracharya found the idol of Lord Badrinath in Alaknanda River. He places the idol inside the cave near the Tapt Kund. Then somewhere around 16th Century, the King of Garhwal shifted the Murti of the Lord to present location.

Darshan Mandap: It is somehow like a worship hall wherein Lord Vishnu is worshipped. It is the place renowned for performing rituals inside the temple to please the Lord.

Sabha Mandap: As its name suggests, this is the place in the temple complex used by the devotees to assemble. It is like an assembly hall that carries enough space to hold large number of devotees. From here, the pilgrims move ahead to the Darsahn Mandap and then Garbha Griha.

Every day, a series of puja is perform inside the Badrinath Temple. Pooja in Badrinath temple begins with Maha Abhishek followed with Abhishek, Geeta Path and Bhagwat puja. Also it is complete series of pooja in the morning session with the beginning around 4:30 am. For the evening timings, two main pooja or rituals i.e. Aarti and Geeta Govinda Path. All puja and rituals are recite from the Sahasranama and Ashtotram.

Once the evening aarti is completed, the idol of the Lord Badrinath sets free from all the decorations. After the removal of the decoration, the idol is coated with the scented paste of sandalwood. And devotees receives as Prasad on the next day morning at the Nirmalaya Darshan.

Devotees can perform special pooja inside the temple. In the temple, almost all the poojas and rituals including the Lord’s decoration part is done in front of the devotees.

Temple opening ceremony is Maha Abhishek  pooja which Rawal performs at around 4:30 am in the morning. Similarly, Badrinath temple closing ceremony accounts for Geeta Govinda Path which is performed by the Rawal himself in the evening. Normally, This ceremony is perform before the temples closes for the devotees.

Badrinath Temple is the mark of humanity and mankind that nestled in the beautiful and joyous Chamoli district of Uttarakhand. It experiences the largest footfall of the devotees who pace up to seek blessings of the Lord Vishnu and redemptions from their sufferings.

GET BEST DEAL
ON CHARDHAM YATRA 2021